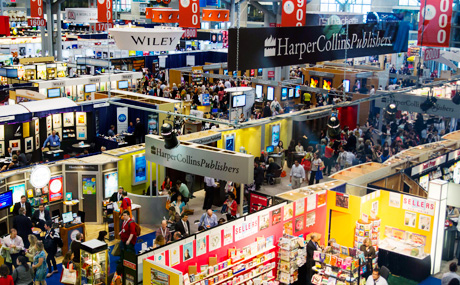 This spring, I attended two important fairs in the book market: London Book Fair in April and Book Expo America at the end of May.

At the end of this intense educational period, I can say that the two fairs are very different. My impression is that London is focused more on the technical features and on catching up on the latest tendencies. The American Expo is more about the buzz and the show.

First of all, the venue in New York, the Javits Center, is spectacular. A huge construction made of glass, with a lot of conference rooms. The London venue, Earl’s Court Exhibition Centre, is big too, but is old and distracting. That’s why, next year, the new venue will be the Olympia Exhibition Centre.

As a reader, I enjoyed the Book Expo more than the London Fair. It’s like being in Wonderland. Every publishing house has an attractive booth, where famous authors are at our disposal to sign their books and chat with their fans. And there are tons of fans, lining for hours just to grab Cassandra Clare’s or Veronica Roth’s or John Green’s autograph.

I spent a whole day wandering from booth to booth, and finally I was satisfied with my spoils: 11 YA fantasy books by new and famous authors I like. My precious…

I had to buy another suitcase to carry them on the plane.

My experience as an author has been completely different. In London, I could take part in useful seminaries. They were arranged in a small area – a little too noisy, though, but split up in round tables with a maximum of 10 people each. The result was intimate, and we authors managed to connect directly to the speakers to ask questions and solve doubts.

In New York, the conference schedule was huge. The rooms were big and could contain hundreds of people. I was able to follow a lot of them, and I must say that all the speakers are competent and hold leading positions in the market.  But the general impression I had is that the conferences are more focused on the readers and the industry than on the writers.

Despite the differences, the topics of the fairs are quite the same: traditional publishing against self-publishing (no one knows who will win, though); discoverability and social media; connecting with the readers and social media (I know I’ve already said it, but unfortunately is the main topic of the conferences, also for the big publishing houses, not just for self-pub authors).

One thing is certain: the market is changing for everyone; readers, bloggers, writers, and publishers. It’s getting more proficient, but also more competitive and tough.

This website uses cookies to improve your experience while you navigate through the website. Out of these, the cookies that are categorized as necessary are stored on your browser as they are essential for the working of basic functionalities of the website. We also use third-party cookies that help us analyze and understand how you use this website. These cookies will be stored in your browser only with your consent. You also have the option to opt-out of these cookies. But opting out of some of these cookies may affect your browsing experience.
Necessary Always Enabled

Any cookies that may not be particularly necessary for the website to function and is used specifically to collect user personal data via analytics, ads, other embedded contents are termed as non-necessary cookies. It is mandatory to procure user consent prior to running these cookies on your website.